A downloadable game for Windows

E♥E is an interactive book for a mature audience, emphasizing themes of the occult and interpersonal relationships using subtle magic, thought-provoking writing, and simulation-based game mechanics. In E♥E, you take on the role of a woman mage in an intimate, esoteric, and breathtaking text-based investigation in the shrouded worlds of the occult and interpersonal relationships. Inspired by literary fiction, E♥E presents a world that will always be much bigger than your comprehension, beyond anyone's ability to master. Within that framework, however, your mage is as respected by the world and the narrative as she strives to be; the clues to understanding the occult are there, if she wishes to grasp them.

This is what makes E♥E stand out. Many stories are written to accommodate the novice on a heroic quest. In such games, both the player and the character are assumed to know little about the setting for most of the narrative, and end the story as its master after a whirlwind adventure. Even romance and relationships are often presented as challenges to be conquered by a wilful, wily protagonist. The narrative in most of these games is unyielding, with only a few select breakpoints, if any.

While E♥E constrains you to playing a woman (in a broadly inclusive sense) mage in a world that cannot be heroically 'won', beyond that, you have near-absolute freedom of choice in the game; you are its co-author. You determine your character's emotional state — not the game. You determine her interests, clothing, professional skill, and most of all, her loved ones. While programming limits restrict your potential interests to one of three key characters — a lonely widower with a troubled past, a stern and motherly librarian, a polite and gentle tentacle horror — what that relationship looks like is entirely up to you. Relationships between the player character and other characters play out on a set of three axes – intimacy (friendship), romance (love), and eroticism (sex) – where consent is paramount with all three axes.

E♥E is proudly LGBTQ-friendly and sex-positive. Much latitude is given for the definition of a woman as it applies to the protagonist, and as mentioned above, the shape of her potential relationships is entirely up to you.

It's very important that you read Instructions.txt and follow it, or else the game will not run. The game requires Windows 7 SP1 or later (Windows 10 or 11 is recommended for the smoothest experience) and installed .NET libraries.

Programming Notes: I already finished writing a custom engine for the game, written in C#. The engine uses a complementary pair of custom scripting languages, one based on finite state automata, the other on formal grammars. It's very data-driven and expandable. The scripting is used to generate HTML code on the fly, that in turn is used to display the game text to the player. Thanks to the .NET libraries, it has extensive support for HTML5, CSS3 and ES5 thanks to the .NET libraries used.

The extensibility also means mod support/custom user content. Though the engine is closed, the game itself will be open source. You can do what you want with it, including building your own game, if that would be your fancy. Very few things are hardcoded, so making it a completely different genre is within the realm of possibility. Fo E♥E itself, all the game's mechanics are implemented using the scripting language.

This game is developed mainly by one kitty with a small supporting team. This, combined with the game's emphasis on freedom of choice within a framework of realistic consequence, means that linear progression of the game (how far you can progress with any one storyline at a time) is relatively slow. Volunteers are welcome to apply, but the game's unique engine and vision means that not all applicants will be a good fit. 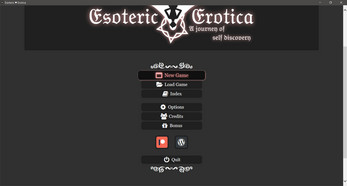 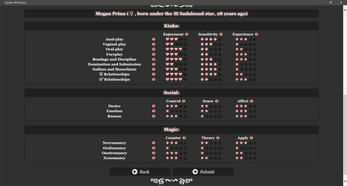 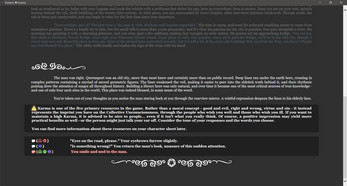 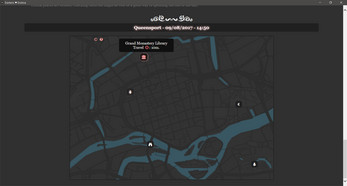